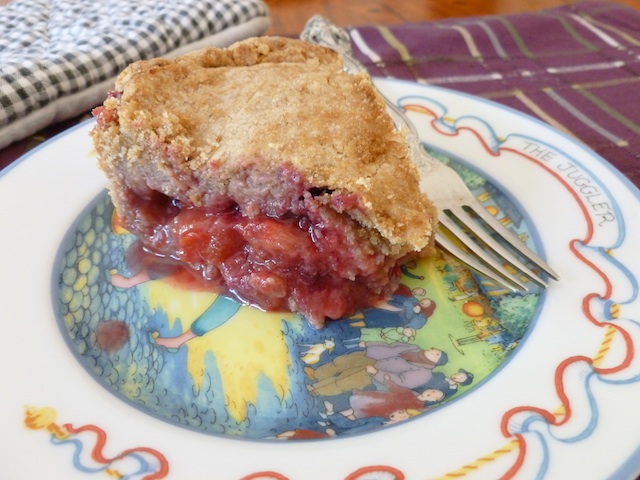 It’s been a long time since I produced a pie. This one felt good, even though I improvised and didn’t have much of a plan. I decided to cut a lot of the sugar and all of the butter, so I used the handy coconut spread I found in the fridge, and sweetened the filling with just a bit of honey. Because the three fruits I chose are naturally so sweet, it worked out really well. As I mention in the recipe below, if I make this pie crust again I will do a crumble top rather than a full crust, since the combination of whole wheat flour and coconut make for a stubborn dough that doesn’t easily roll. The pie, though simple, did not disappoint, and can be easily replicated with any combination of sweet, in-season fruits for a last-minute delicious dessert.

In a large bowl, stir together the flour, salt, and sugar. Add the vanilla and the coconut spread in chunks and stir in with a fork until the mixture resembles course crumbs. Sprinkle the ice water, a tablespoon or two at a time, over the mixture. Using a spatula, gently fold the flour onto itself so that the loose crumbs start to gather together. Continue adding just enough water to moisten the dough, then use your hands to gather it into a rough ball. Cover and place in the fridge to chill.

Preheat oven to 400ºF. Slice the plums and pluots about 1 inch thick into a medium bowl. Slice the strawberries and add to the other fruit. Add flour, honey, cinnamon, and vanilla and stir gently until evenly coated and the white of the flour no longer shows.

Remove the dough from the fridge. Take half the dough and press into a 9 inch pie dish, so it covers the bottoms and up the sides of the dish. Pour the fruit mixture into the lined pie dish and spread evenly. With the other half of the dough, you can do one of two things: place it on a floured surface and press into a round disk, then gently transfer to the top of the pie. OR you can add oats and crumble it over the top of the filling (if I make this pie again, I will do this). The whole wheat and coconut make for a crumbly dough that is not conducive to rolling. If you have a top crust, brush with almond milk or water and sprinkle with sugar, then cut several slits in the crust.

Place on the middle rack of the oven and bake for 20 minutes. Lower temperature to 350ºF and bake for an additional 30-35 minutes, until the juices are bubbling and the crust is browned. Remove and let cool before serving (letting it cool for several hours or overnight allows the fruit to set up).